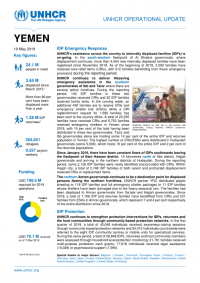 3.65 M displaced since March 2015 More than 80 per cent have been displaced more than a year

UNHCR’s assistance across the country to internally displaced families (IDPs) is on-going. In the south-western flashpoint of Al Dhale’e governorate, where displacement continues, more than 4,404 new internally displaced families have been registered since November 2018. As of the beginning of 2019, 2,000 families have received core-relief items (CRIs), with 512 families benefitting from these emergency provisions during the reporting period.

Since January 2019, there have been constant flows of IDPs southwards leaving the flashpoint of Bani Hassan district, 15 kilometres north of Abs district, Hajjah governorate and arriving in the northern districts of Hudaydah. During the reporting period, some 2,126 IDP families were newly identified and provided with CRIs. Within Hajjah city, a total of 2,748 IDP families of both recent and protracted displacement received CRIs or replacement items.

UNHCR continues to strengthen protection interventions for IDPs, returnees and the host communities through community-based protection networks. In the first quarter of 2019, a total of 43,048 individuals received awareness-raising sessions through community-based protection networks and 34,410 individuals countrywide were referred to the eight IDP community centres or mobile units for specialized services.