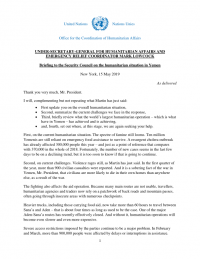 Under-Secretary-General for Humanitarian Affairs and Emergency Relief Coordinator, Mark Lowcock Briefing to the Security Council on the humanitarian situation in Yemen – New York, 15 May 2019

Thank you very much, Mr. President.

I will, complementing but not repeating what Martin has just said:

• First update you on the overall humanitarian situation,
• Second, summarize the current challenges we face in the response,
• Third, briefly review what the world’s largest humanitarian operation – which is what have in Yemen – has achieved and is achieving,
• and, fourth, set out where, at this stage, we are again seeking your help.

First, on the current humanitarian situation. The spectre of famine still looms. Ten million Yemenis are still reliant on emergency food assistance to survive. A resurgent cholera outbreak has already affected 300,000 people this year – and just as a point of reference that compares with 370,000 in the whole of 2018. Fortunately, the number of new cases seems in the last few days to be on a declining trend, but it is too soon to know if that is going to continue.

Second, on current challenges. Violence rages still, as Martin has just said. In the first quarter of the year, more than 900 civilian casualties were reported. And it is a sobering fact of the war in Yemen, Mr. President, that civilians are more likely to die in their own homes than anywhere else, as a result of the war.

The fighting also affects the aid operation. Because many main routes are not usable, travellers, humanitarian agencies and traders now rely on a patchwork of back roads and mountain passes, often going through insecure areas with numerous checkpoints.

Heavier trucks, including those carrying food aid, now take more than 60 hours to travel between Sana’a and Aden – that is about four times as long as used to be the case. One of the major Aden-Sana’a routes has recently effectively closed. And without it, humanitarian operations will become even slower and even more expensive.

Severe access restrictions imposed by the parties continue to be a major problem. In February and March, more than 900,000 people were affected by delays or interruptions in assistance.

Restrictions on movement of goods or staff are by far the biggest cause of delay. A large majority of these incidents occurred in areas controlled by Ansar Allah-affiliated authorities, but there are too many problems arising from decisions by others, as well.

Over the last few weeks, we have had intensive discussions with Ansar Allah-affiliated authorities on the steps required to ensure that all assistance in Yemen is delivered in line with humanitarian principles. These discussions are progressing, and I hope that previously agreed measures – including biometric registration of beneficiaries – will soon be fully implemented.

We are making some progress on some issues.

On 5 May, a joint UN mission reached the Red Sea Mills again, for only the second time since September 2018.

And I want to acknowledge the support we received for this mission, including assurances on security from all parties. The assessment team travelled from Aden to Hudaydah through Government-controlled areas, and the Coalition was especially helpful in facilitating these movements. This is an example of how deconfliction with the Coalition continues to be a key enabler of the response across Yemen. Technicians are now working now at the Red Sea Mills to assess damage, repair equipment and process whatever grain can be salvaged. This is probably going to take several weeks.

Last month, Mr. President, I flagged our concerns over the Safer oil tanker. The tanker, which you will recall is moored off the coast of Hudaydah, has had no maintenance since 2015, and is at risk of rupturing or exploding, potentially spilling 1.1 million barrels of oil into the Red Sea. Just to give you a sense of the scale of the problem, that is four times as much as was spilt in the Exxon Valdez disaster 30 years ago.

All parties have now assured us that a technical assessment can proceed for the Safer oil tanker. And a UN assessment team plans to deploy to the site very soon, so we can work out the best way forward to minimize the risks.

Thirdly, I want to address what, despite all the problems, we are able to deliver in what I have said remains the world’s largest humanitarian operation. In January and February, 130 agencies worked together to provide 9.8 million people with food, water, healthcare and other assistance. In March, the World Food Programme fed 10.6 million people – that is more than in any previous month.

In April, a cholera vaccination campaign reached 1.1 million people in Sana’a. We now have additional, independent confirmation that help is reaching people. With funding from our largest donors, my office has commissioned an independent third-party monitoring exercise which covers the entire response. Data was collected from 108 districts across the country, using a mix of beneficiary surveys and key informant interviews. Thousands of people were contacted and asked what humanitarian assistance they had received.

One of the questions I am often asked is whether we are seeing a reduction in suffering and famine risk as a result of the huge relief operation. Our first goal, to be clear, has been simply to keep people alive. I hope it is obvious that we have been reasonably successful at that: there has been no widespread famine, at least up to now.

But we are also now starting to see the beginning of more positive, sustained outcomes. A year ago, agencies estimated that 107 districts were at risk of famine. On the new data available to us today, the food and nutrition situation has improved in more than half of those districts, and one-fifth of them are, as of today, no longer at risk of famine.

Again, one-fifth of districts at risk of famine last year are not currently at risk. That has only been possible because last year our operation was relatively well-funded. And that brings me to my fourth and final point – to the help we seek from you. The most immediate issue is funding. The slight improvements I have just described will not be sustained unless donors continue to fund the relief operation.

Last month, you will recall, I told you the 2019 UN response plan had received only 6 per cent of the required resources, and major cuts to core relief activities were imminent.

As of today, 20 per cent of the required resources have now been provided. I want to thank in particular the Kingdom of Saudi Arabia and the United Arab Emirates for their funding since last month, which as I understand it came from the pledge they announced last November.

But there is still a long way to go. We again call on all our donors to fully disburse the pledges they made in Geneva in February. I am looking forward to travelling to Riyadh again in the next several days to meet Saudi and Emirati officials and finalize the arrangements for the joint pledge – the new joint pledge – of $1 billion they made in Geneva. These two donors’ block grant to the United Nations last year was absolutely instrumental in scaling up the aid operation, and I continue to view this approach as a global best practice in humanitarian support and donorship.