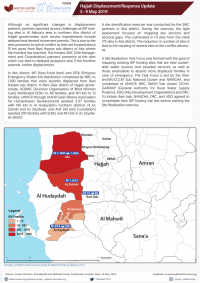 Although no significant changes in displacement patterns, partners reported access challenges at IDP hosting sites in Al Raboa’a area in northern Abs district of Hajjah governorate; such access impediments include delayed and denied movement permits. This is due to the sites proximity to active conflict as they are located about 15 km away from Bani Hassan sub district of Abs where the frontline has reached. This hinders SMC (Site Management and Coordination) partners’ presence at the sites which can lead to delayed assistance and, if the frontline extends, further displacement.

A site identification exercise was conducted by the SMC partners in Abs district. During the exercise, the light assessment focused on mapping key services and sectoral gaps. This culminated in 111 sites from the initial 173 sites in Abs district. The reduction in number of sites is due to the vacating of several sites as the conflict advances.

A Site Realization Task Force was formed with the goal of mapping existing IDP hosting sites that are near sustainable water sources and essential services, as well as those extendable to absorb more displaced families in case of emergency. The Task Force is led by the Shelter/NFI/CCCM Sub National Cluster and NAMCHA, and comprised of UNHCR, NRC, WASH Sub cluster, OCHA,
GARWAP (General Authority for Rural Water Supply Projects), ADO (Abs Development Organisation) and DRC. To initiate their task, NAMCHA, DRC, and ADO agreed to consolidate their IDP hosting site lists before starting the Site Realization exercise.