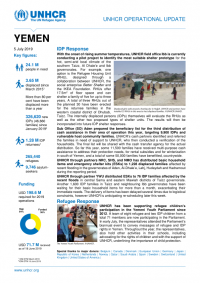 With the onset of rising summer temperatures, UNHCR field office Ibb is currently conducting a pilot project to identify the most suitable shelter prototype for the hot, semi-arid local climate of the southern Taizz, Al Dhale’e and Ibb governorates. For example, one option is the Refugee Housing Unit (RHU), designed through a collaboration between UNHCR, the social enterprise Better Shelter and the IKEA Foundation. RHUs offer 17.5m2 of floor space and can shelter a family of five for up to three years. A total of three RHUs out of the planned 30 have been erected for the returnee families in the western coastal district of Dhubab, Taizz. The internally displaced persons (IDPs) themselves will evaluate the RHUs as well as the other two proposed types of shelter units. The results will then be incorporated into future IDP shelter responses.

Sub Office (SO) Aden prepared the beneficiary list for the third distribution of cash assistance in their area of operation this year, targeting 9,900 IDPs and vulnerable host community families. UNHCR’s cash partners identified and referred the families in need of support to UNHCR, who then conducted a verification of the households. The final list will be shared with the cash transfer agency for the actual distribution. So far this year, some 11,500 families have received multi-purpose cash assistance to address their protection needs, for rental subsidies and for winterization in south of Yemen, and a total of some 50,000 families have benefitted, countrywide.
UNHCR through partners NRC, SHS, and NMO has distributed basic household items and emergency shelter kits (ESKs) to 1,228 displaced families affected by recent flooding in the governorates of Aden, Al-Dhale’e, Lahj, Hudaydah and Hadramout during the reporting period.
UNHCR through partner YWU distributed ESKs to 76 IDP families affected by the recent floods in central Sama and eastern Mawiah districts of Taizz governorate.

Another 1,600 IDP families in Taizz and neighbouring Ibb governorates have been waiting for their basic household items for more than a month, exacerbating their immediate needs. The delivery of items has been delayed several times due to logistical constraints, however UNHCR is anticipating re-scheduling later this week.

UNHCR has been supporting refugee children’s participation in the Yemeni Youth Parliament since 2012. A team of eight refugee and two IDP children from a total 71 members are now participating in the Parliament.

In early July, the representatives attended the Parliament’s biannual event to convey messages of refugee and IDP rights in Yemen. Throughout the year, the representatives, also hold other activities in their schools, including advocating for the rights of children and with the support of UNHCR, underlining the importance of child protection. 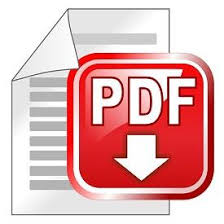 As deadly coronavirus threatens war-torn Yemen, peace is needed more than ever

A Coronavirus Ceasefire Offers a Way Out for War-torn Yemen