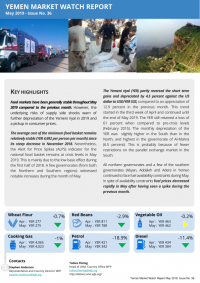 Food markets have been generally stablethroughoutMay 2019 compared to the previous month. However, the underlying risks of supply side shocks warn of further depreciation of the Yemeni riyal in 2019 and a pickup in consumer prices.

The average cost of the minimum food basket remains relatively stable (YER 4,692 per person per month) since its steep decrease in November 2018. Nevertheless, the Alert for Price Spikes (ALPS) indicator for the national food basket remains at crisis levels in May 2019. This is mainly due to the low base effect during the first half of 2018. A few governorates (from both the Northern and Southern regions) witnessed notable increases during the month of May.

The Yemeni riyal (YER) partly reversed the short term gains and depreciated by 4.5 percent against the US dollar to USD/YER 533, compared to an appreciation of 12.9 percent in the previous month. This trend started in the third week of April and continued until the end of May 2019. The YER still retained a loss of 61 percent when compared to pre-crisis levels (February 2015). The monthly depreciation of the YER was slightly higher in the South than in the North, and highest in the governorate of Al-Mahra (6.5 percent). This is probably because of fewer restrictions on the parallel exchange market in the South.