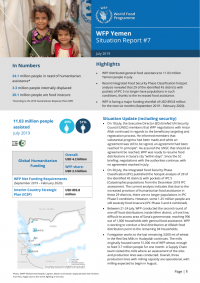 • Recent Integrated Food Security Phase Classification hotspot analysis revealed that 29 of the identified 45 districts with pockets of IPC 5 no longer have populations in such conditions, thanks to the increased food assistance.

• On 18 July, the Executive Director (ED) briefed UN Security Council (UNSC) members that WFP negotiations with Ansar Allah continued in regards to the beneficiary targeting and registration process. He informed members that substantial progress had been made and while an agreement was still to be signed, an agreement had been reached “in principle”. He assured the UNSC that should an agreement be reached, WFP was ready to resume food distributions in Sana’a city “within days”. Since the SC briefing, negotiations with the authorities continue, with no agreement reached in July.

• On 30 July, the Integrated Food Security Phase Classification (IPC) published the hotspot analysis of 29 of the identified 45 districts with pockets of IPC 5 (Catastrophe) populations from the December 2018 IPC assessment. The current analysis indicates that due to the increased provision of humanitarian food assistance in these 29 districts, there are no longer populations in IPC Phase 5 conditions. However, some 1.25 million people are still severely food insecure (IPC Phase 3 and 4 combined).

• Between 21-24 July, WFP conducted the second round of one-off food distributions inside Nihm district, a front-line, difficult-to-access area of Sana’a governorate, reaching 906 out of 1,000 households with general food assistance. WFP is working to conduct a final distribution at Alfalah food distribution point to the remaining 94 households.

• Fumigation works to the last remaining 3,000 mt of wheat in the Red Sea Mills in Hudaydah continues. The mills originally housed some 51,000 mt of WFP wheat, enough to feed 3.7 million people for one month. A Supply Chain team visited the mills where an assessment of the silos and production lines was conducted. Overall, three production lines with milling capacity are operational, with milling expected to begin in August.