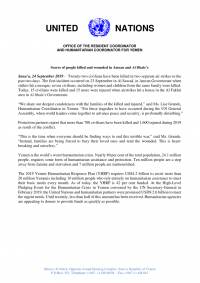 Sana’a, 24 September 2019 – Twenty-two civilians have been killed in two separate air strikes in the past two days. The first incident occurred on 23 September in Al Sawad, in Amran Governorate when strikes hit a mosque; seven civilians, including women and children from the same family were killed. Today, 15 civilians were killed and 15 more were injured when airstrikes hit a house in the Al Fakhir area in Al Dhale’e Governorate.

“We share our deepest condolences with the families of the killed and injured,” said Ms. Lise Grande, Humanitarian Coordinator in Yemen. “For these tragedies to have occurred during the UN General Assembly, when world leaders come together to advance peace and security, is profoundly disturbing.”

Protection partners report that more than 700 civilians have been killed and 1,600 injured during 2019 as result of the conflict.

“This is the time when everyone should be finding ways to end this terrible war,” said Ms. Grande. “Instead, families are being forced to bury their loved ones and tend the wounded. This is heart-breaking and senseless.”

The 2019 Yemen Humanitarian Response Plan (YHRP) requires US$4.2 billion to assist more than 20 million Yemenis including 10 million people who rely entirely on humanitarian assistance to meet their basic needs every month. As of today, the YHRP is 42 per cent funded. At the High-Level Pledging Event for the Humanitarian Crisis in Yemen convened by the UN Secretary-General in February 2019, the United Nations and humanitarian partners were promised USD$ 2.6 billion to meet the urgent needs. Until recently, less than half of this amount has been received. Humanitarian agencies are appealing to donors to provide funds as quickly as possible.