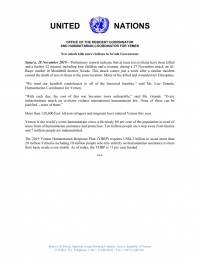 Sana’a, 28 November 2019 – Preliminary reports indicate that at least ten civilians have been killed and a further 22 injured, including four children and a woman, during a 27 November attack on AlRaqw market in Monabbih district, Sa’ada. This attack comes just a week after a similar incident caused the death of ten civilians at the same location. Many of the killed and wounded are Ethiopians.

“We send our heartfelt condolences to all of the bereaved families,” said Ms. Lise Grande, Humanitarian Coordinator for Yemen.

“With each day, the cost of this war becomes more unbearable,” said Ms. Grande. “Every indiscriminate attack on civilians violates international humanitarian law. None of these can be justified—none of them.”

The 2019 Yemen Humanitarian Response Plan (YHRP) requires US$4.2 billion to assist more than 20 million Yemenis including 10 million people who rely entirely on humanitarian assistance to meet their basic needs every month. As of today, the YHRP is 71 per cent funded.