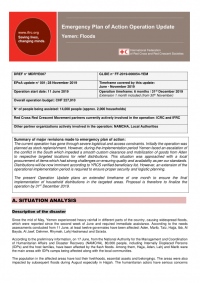 Summary of major revisions made to emergency plan of action:

The current operation has gone through severe logistical and access constraints. Initially the operation was planned as stock replenishment. However, during the implementation period Yemen faced an escalation of the conflict in the South which impeded a smooth custom clearance and mobilization of goods from Aden to respective targeted locations for relief distributions. This situation was approached with a local procurement of items which had strong challenges on ensuring quality and availability as per our standards. Distributions will be now imminent according to YRCS verified beneficiary list. However, an extension of the operational implementation period is required to ensure proper security and logistic planning.

The present Operation Update plans an extended timeframe of one month to ensure the final implementation of household distributions in the targeted areas. Proposal is therefore to finalize the operation by 31st December 2019.

Description of the disaster

Since the mid of May, Yemen experienced heavy rainfall in different parts of the country, causing widespread floods, which were reported since the second week of June and required immediate assistance. According to the needs assessments conducted from 11 June, at least twelve governates have been affected: Aden, Marib, Taiz, Hajja, Ibb, Al Bayda, Al Jawf, Dahmer, Rhymah, Lahj Hadramaut and Sa’ada.

According to the preliminary information, on 17 June, from the National Authority for the Management and Coordination of Humanitarian Affairs and Disaster Recovery (NAMCHA), 80,000 people, including Internally Displaced Persons (IDPs) and the host families, have been affected by the flash floods. Among them, Hajja, Aden, Lahj and Marib were the main areas with IDPs camps being affected along with the local communities.

The population in the affected areas have lost their livelihoods, essential assets and belongings. The areas were also impacted by subsequent floods during August especially in Hajjah. The humanitarian actors have serious concerns

Statement in response to an airstrike in Hajjah, Yemen

Waiting to declare famine ‘will be too late for Yemenis on…