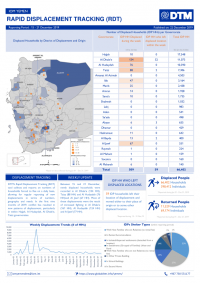 The ongoing conflict in Yemen, since March 2015, has led to the displacement of more than 3.6 million people (according to DTM’s 2018 Area Assessment). DTM’s Rapid Displacement Tracking tool collects and reports on numbers of households forced to flee on a daily basis, allowing for regular reporting of new displacements in terms of numbers, geography and needs.

Between the 15th and 21st of December, the highest number of displacements were seen in:

Most displacement resulted from increased conflict in the following Governorates and districts: