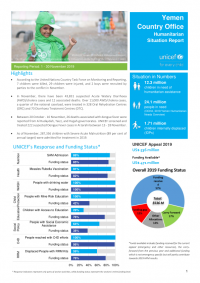 • According to the United Nations Country Task Force on Monitoring and Reporting, 7 children were killed, 29 children were injured, and 2 boys were recruited by parties to the conflict in November.

• In November, there have been 43,831 suspected Acute Watery Diarrhoea (AWD)/cholera cases and 12 associated deaths. Over 11,000 AWD/cholera cases, a quarter of the national caseload, were treated in 328 Oral Rehydration Centres (ORC) and 70 Diarrhoea Treatment Centres (DTC).

• As of November, 287,336 children with Severe Acute Malnutrition (89 per cent of annual target) were admitted for treatment in 2019.

Between January and November 2019, UNICEF received $302.8 million of contributions towards the 2019 Humanitarian Action for Children (HAC) appeal, which is aligned with the Yemen Humanitarian Response Plan for 2019. UNICEF wishes to express its deep gratitude to all public and private sector donors for contributions and pledges received, which make the current response possible.

In November, attacks on civilians continued across the country. On 6 November, airstrikes hit a key hospital which was providing free medical services to hundreds of thousands of Yemenis, destroying a large warehouse of medical supplies, however no casualties were reported. On 22 and 27 November, there were shelling attacks on Al-Raqw market in Sa’ada, killing 20 people and injuring 40 others, including five children. Casualties in the second attack on the market include Ethiopian and Somali nationals; migrants and asylum-seekers who are also suffering from the conflict. In the reporting month, the United Nations Country Task Force on Monitoring and Reporting verified 92 per cent of cases of grave child rights violations. From the verified incidents, seven children (three girls and four boys) were killed, 29 children (five girls and 24 boys) were injured, and two boys were recruited by parties to the conflict.

During the reporting period, 43,831 suspected Acute Watery Diarrhea ‘AWD’/cholera cases and 12 associated deaths were recorded (case fatality rate [CFR] 0.03 per cent). Al Bayda, Lahj, and Sa’ada are most effected with those cholera associated deaths in November. While children under five represent 29.3 per cent of the total suspected cases, the elderly are most seriously affected where deaths are higher among the over sixty age group, indicating possible comorbidity and mortality causes. While the suspected AWD/cholera cases slightly increased in the first week of November, it has been decreasing since the second week of November.

Suspected cholera cases were reported in 287 out of 333 districts in November.

Between 1 January – 10 November, the cumulative suspected dengue fever cases were 30,275, with 138 associated deaths (CFR 0.5 per cent). A total of 173 districts have reported suspected dengue cases in October 2019 with 85 new districts affected over the past month. Between 20 October – 10 November, 26 deaths of suspected dengue were reported from Al-Hudaydah, Taizz, and Hajjah governorates. Health authorities have requested all UN agencies to prioritize dengue response support in the country focusing on community awareness and prevention interventions, environmental management and medical supplies. Despite an initial slight increase in the number of AWD/cholera cases in the first week of November, the numbers however, have started to decline in the following week when the rainy season stopped and the increased number of partners’ interventions contributed to a decrease in the suspected cases.

In its continuing effort to strengthen risk prevention and management measures, UNICEF conducted an audit of its operations covering the period from January 2017 to March 20193 . It is now actively implementing a series of measures to mitigate identified risks as it continues to deliver its assistance for children in the complex environment of Yemen.

Statement in response to an airstrike in Hajjah, Yemen

Waiting to declare famine ‘will be too late for Yemenis on…