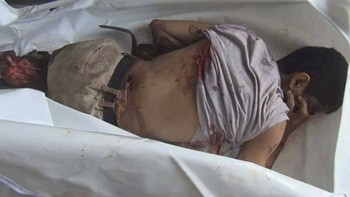 Killed (2) civilians including a child and injured (4) others from the staff of communications construction management of the Ministry of Communications by (3) airstrikes that targeted administration building and burnt (3) cars and many damages in engineers habitation building, Al-Hali district.
(2) airstrikes targeted the western gate of Al-Hodeida port and destroyed it in Al-Hali district.
One airstrike targeted civilians’ houses in Al-Jarash area, Bajil district.
Al-Hodeida:
(2 airstrikes + 45 shells)

Killed the child (Shehab Hussein Al-Maghrabi – 11 years old) during he was with livestock, he killed by exploding the cluster bombs that the warplanes threw it on Al-Khasamah village also killed a livestock in Bani Matar district.
Taiz:
(17 airstrikes)

Under Secretary-General for Humanitarian Affairs and Emergency Relief Coordinator,…