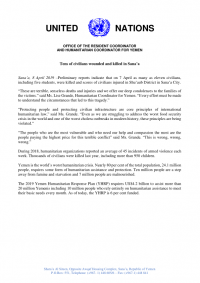 Tens of civilians wounded and killed in Sana’a [EN/AR]

Sana’a, 8 April 2019 –Preliminary reports indicate that on 7 April as many as eleven civilians, including five students, were killed and scores of civilians injured in Shu’aub District in Sana’a City.

“These are terrible, senseless deaths and injuries and we offer our deep condolences to the families of the victims.” said Ms. Lise Grande, Humanitarian Coordinator for Yemen. “Every effort must be made to understand the circumstances that led to this tragedy.”

“Protecting people and protecting civilian infrastructure are core principles of international humanitarian law,” said Ms. Grande. “Even as we are struggling to address the worst food security crisis in the world and one of the worst cholera outbreaks in modern history, these principles are being violated.”

“The people who are the most vulnerable and who need our help and compassion the most are the people paying the highest price for this terrible conflict” said Ms. Grande. “This is wrong, wrong, wrong.”

During 2018, humanitarian organizations reported an average of 45 incidents of armed violence each week. Thousands of civilians were killed last year, including more than 950 children.

The 2019 Yemen Humanitarian Response Plan (YHRP) requires US$4.2 billion to assist more than 20 million Yemenis including 10 million people who rely entirely on humanitarian assistance to meet their basic needs every month. As of today, the YHRP is 6 per cent funded.

Death of 30 civilians, including children, shows conflict in Yemen is not slowing…

Statement by WHO’s Regional Office for the Eastern…