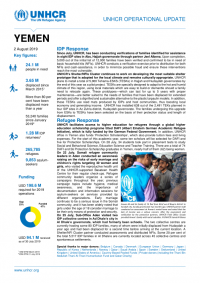 Since July, UNHCR, has been conducting verifications of families identified for assistance in eight IDP sites in Abs, Hajjah governorate through partner Jeel Albena. Upon completion, 5,000 out of the initial list of 12,000 families have been verified and confirmed to be in need of basic household kits (NFIs). UNHCR conducts a verification exercise prior to distribution for both NFIs and cash-assistance, in order to minimize possible fraud and ensure these interventions reach the most vulnerable.

UNHCR’s Shelter/NFIs Cluster continues to work on developing the most suitable shelter prototype that is adapted for the local climate and remains culturally appropriate. UNHCR plans to install a total of 5,000 Tehama-ESKS (TESKs) in Hajjah and Hudaydah governorates by the end of this year as a pilot project. TESKs are specially designed to adapt to the hot and humid climate of this region, using local materials which are easy to build or dismantle should a family need to relocate again. These prototypes—which can last for up to 5 years with proper maintenance—are better suited to the needs of families that have been displaced for extended periods and offer a dignified and sustainable alternative to the plastic tarpaulin models. In addition, these TESKs use reed mats produced by IDPs and host communities, thus boosting local economy and generating income. UNHCR has installed 638 out of the 2,491 TEKs planned in four IDP sites in Az Zuhra district, Hudaydah governorate. The families undergoing this upgrade from ESKs to TESKs have been selected on the basis of their protection status and length of displacement.

UNHCR facilitates access to higher education for refugees through a global higher education scholarship programe titled DAFI (Albert Einstein German Academic Refugee Initiative), which is fully funded by the German Federal Government. In addition, UNHCR office in Yemen also funds ‘Protection Scholarships’, which also provide tuition fees and living expenses. For the start of this academic year, some ten scholars will be selected for DAFI and five for Protection Scholarships. On 28 July, 34 students took part in placement tests to study Social and Behavioral Science, Education Science and Teacher Training. There are a total of 74 DAFI and 56 Protection Scholarship graduates in Yemen, nearly half of them (62) being women.

On 22 July, Somali refugee community leaders in Aden conducted an awareness raising on the risks of early marriage and children’s rights targeting 40 women and girls, who visited the reproductive health unit of the UNHCR-supported Basateen Health Centre for their regular check-ups. Refugee community leaders organize a series of campaigns throughout the year; previous campaign topics include hygiene, medical awareness, and the importance of documentation and information sessions for asylum-seekers on services provided by different organizations. Early marriage continues to be a serious issue in the Somali community, and it has been widely noted that girls under the age of 18 consider marriage to be their only means of protection and security.

On 25 July, Sub-Office Aden visited two IDP collective centres in Ad Dhale’e city in Al Dhale’e governorate, which had formerly been schools. The two collective centres are currently hosting some 80 IDP families, many of whom were initially displaced from Hudaydah a year ago and had been displaced for a second time before arriving at the current location. A Shelter/NFI Cluster partner conducted assessments and distributed NFIs. Some 20 per cent of the total 5,517 IDP families in Al Dhale’e are currently located across 45 collective centres and spontaneous settlements.