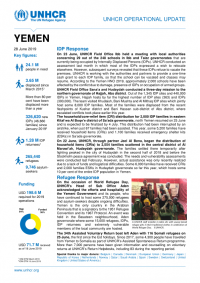 On 23 June, UNHCR Field Office Ibb held a meeting with local authorities concerning 29 out of the 248 schools in Ibb and Taizz governorates that are currently being occupied by Internally Displaced Persons (IDPs). UNHCR conducted an assessment last month in which most of the IDPs expressed a wish to relocate elsewhere. However, subsequent surveys revealed that these IDPs refuse to vacate the premises. UNHCR is working with the authorities and partners to provide a one-time cash grant to each IDP family, so that the school can be vacated and classes may resume. According to the Yemen HNO 2019, approximately 2,000 schools have been affected by the conflict due to damage, presence of IDPs or occupation of armed groups.

UNHCR Field Office Sana’a and Hudaydah conducted a three-day mission to the northern governorate of Hajjah, Abs district. Out of the 1,345 IDP sites and 440,000 IDPs in Yemen, Hajjah hosts by far the highest number of IDP sites (363) and IDPs (300,000). The team visited Khudaish, Bani Mushta and Al Mithaq IDP sites which jointly host some 8,000 IDP families. Most of the families were displaced from the recent flashpoints of Kushar district and Bani Hassan sub-district of Abs district, where escalated conflicts took place earlier this year.

The household/core-relief item (CRI) distribution for 2,000 IDP families in eastern Kitaf wa Al Boqe’e district of Sa’ada governorate, north Yemen resumed on 25 June and is expected to be finalized by 4 July. This distribution had been interrupted by an airstrike, when just 67 families had been assisted. This year, some 5,200 families have received household items (CRIs) and 1,100 families received emergency shelter kits (ESKs) in Sa’ada governorate.

On 22 June, UNHCR, through partner Jeel Al Bena, began the distribution of household items (CRIs) to 2,554 families scattered in the central district of Al Marawi’ah, Hudaydah governorate. The families settled there temporarily after fighting peaked in the city of Hudaydah in the second half of 2018 and before the Stockholm peace agreement was concluded. The needs and vulnerability assessments were conducted last February. However, actual assistance was only recently realized due to a lack of funds and logistical difficulties. Some 6,000 families have received CRIs and 2,000 families ESKs in Hudaydah governorate so far this year, which hosts some 10 per cent of the entire IDP population in Yemen.

On the occasion of World Refugee Day, UNHCR’s Head of Sub Office Aden acknowledged the efforts and hospitality of the Yemeni Government and its people, who have continued to host some 275,000 refugees and asylum-seekers despite ongoing difficulties.

Yemen is the only country in the Arabian Peninsula that is a signatory to the 1951 Refugee Convention and its 1967 Protocol. An event was held in the Basateen neighbourhood, Aden governorate where some 15,000 refugees, IDPs, IDP returnees and extremely vulnerable members of the local community are hosted.

The 34th Assisted Voluntary Return boat left Aden with 116 Somali refugees on 25 June, the first since the Eid holidays. Since 2017, some 4,300 people have travelled from Yemen to Somalia as part of UNHCR’s Assisted Spontaneous Return programme.

More than 7,000 persons have been given information and counselling on voluntary returns at UNHCR’s Return Helpdesks, including 83 during the reporting period.

As deadly coronavirus threatens war-torn Yemen, peace is needed more than ever

A Coronavirus Ceasefire Offers a Way Out for War-torn Yemen